"A thrilling mystery with all manner of new and interesting paranormal creatures, THE BRIMSTONE BETRAYAL is an action-packed adventure from beginning to end. Rose Webb is the unwitting catalyst for the events that ensue, with the first encounter with Garret foreshadowing the rest of the story. Despite her anger at having been turned into a vampire, Rose is loyal to Brimstone and its ideals, which makes her very dangerous to those who wish to subvert the organization's mission. But Rose isn't about to give up her quest to unravel the mystery, despite her tendency to wake up in strange places after being mortally wounded." - Kathy Samuels, Romance Reviews Today

Rose Webb isn't the chosen one. She just has a job to do. Part hunter, killer, and public relations agent, Rose is a Brimstone Syndicate Seeker. It's her responsibility to ensure that no humans learn of the Syndicate's existence, and all Inhumans are obeying the laws. Unfortunately she is also a one hundred and thirty year old vampire, and that is easier said than done. Humans still consider those things that go bump in the night just a myth, and the Brimstone Syndicate will do anything to keep it that way. A botched operation to clean out a nest of illegal vampires leads Rose and her partners, a young werewolf and a pissy goblin, directly into a confrontation with powers that threaten to subvert the Syndicate. Rose must use her connections in the underworld to investigate, unravel, and solve the mystery and not everyone, or everything, is as it seems. Genre: Fantasy/Science Fiction/Paranormal/Mystery/Suspense Don't Miss The Thrilling Sequel from Terence West! WHISPERS FROM THE DEAD [THE BRIMSTONE CONSPIRACY BOOK 2] 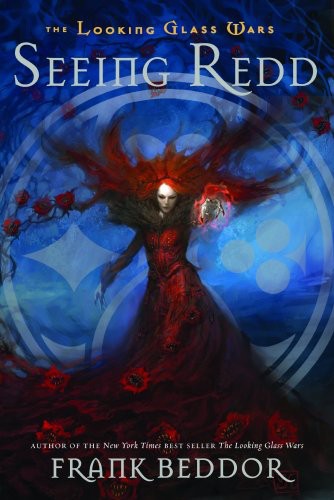 Frank Beddor took a classic story and turned it into a powerful, magical adventure with THE LOOKING GLASS WARS. With Part Two, SEEING REDD, Gerard Doyle once again shows what can be done with just a voice and talent. His cadence, his raw emotion, and his skill bring to life the story of Queen Alyss, who is battling the evil Aunt Redd to keep Wonderland out of her grasp. Doyles enthusiastic performance is reminiscent of Jim Dales work on the Harry Potter series. Clearly, Doyle has made this series his own. Beddors world is one in which the power of imagination is a literal thing. He has plausible explanations for even the most outrageous claims made in Lewis Carrolls book. And youll believe every word. M.S. Winner of AudioFile Earphones Award © AudioFile 2008, Portland, Maine-- Copyright © AudioFile, Portland, Maine