Lizzy has always known she was adopted. But since her family moved to Cornwall her world has turned upside down - and a beautiful shade of blue-green. By chance, she discovered Kes, a brother she never knew existed, and the incredible truth about her birth mother... Now Lizzy and her new family must battle the evil mermaid Queen and her servant, a terrifying giant conger eels. For Lizzy has a powerful treasure and the Queen will stop at nothing to get it. 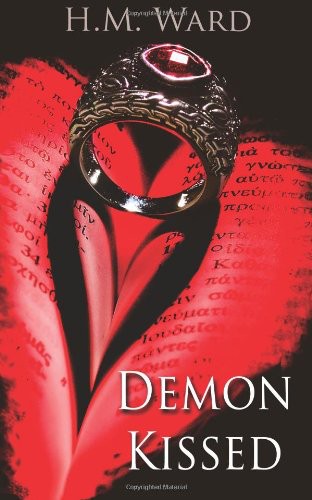 The Valefar boy tricked Ivy Taylor into kissing him, but he took much more than a kiss—he stole her soul and left her within inches of death. By surviving, Ivy is drawn into the conflict between the Martis and the Valefar. The war between these two immortal forces has raged for millennia without distraction. Until now.
Ivy is an anomaly—she is the only person who has ever walked away from a demon kiss alive. Her survival gives her unique and deadly abilities. Too powerful to ignore, Ivy is a threat to both armies. These two ancient enemies will stop at nothing to kill the seventeen-year-old.
Surviving is nothing new for headstrong Ivy, but her survival has never depended on another person before. This time it does. And if she misplaces her trust, she's dead. To her horror, she starts falling in love at the worst possible time—with the enemy. He appears to be protecting her. But she can't be certain if he is trying to help her, or help himself to her power. For Ivy, trusting the right person is the difference between love and survival, or a deadly demon kiss.
Demon Kissed #2 - CURSED - anticipated release date is August 31, 2011.
Codi Malpass’ Review – May 8, 2011 5 out of 5 stars
“I was sucked into this book as soon as I read the first few pages. The amount of detail about the setting and the characters is amazing as well as the length of imagination in this book. There’s enough romance in the story to keep you satisfied…even if it is kind of challenging for it to happen. I don’t really like books with sloppy kisses and “I love you”s on every page.
I can’t really think of any other word for it other than phenomenal. H.M. Ward deserves a freaking award to rival all awards ever given. Another thing I like was the ending line…that made me smile and laugh when I read it. I can’t wait for the second book to come out and I just hope that it’s as good as this book was. Something else I’d like to say is that if I was a producer, I’d probably do anything to make this into a movie and if they ever do…they will have a lot of weight on their shoulders because it’d be hard to make a movie as good as this book.”
Amy’s review Apr 10, 2011 5 of 5 stars
“Wow! The story line was great, and the concept of the book was something I’ve never read before. There were so many twists that I couldn’t predict anything that happened. I was kept guessing the entire time. Books like this are a rare find, especially when not that many people know about them. So I’m spreading the word! Read this book! You won’t regret it! The sequel can’t come out soon enough!”
Allie B.’s review – April 20, 2011 5 out of 5 stars
“This is one of the rare finds where the story draws you in and refuses to let go. Narrated in such detail, you are taken on an epic journey that will make you feel a part of Ivy Taylor’s world, with a vested interest in each character. It takes an extraordinary piece of literature to drive the emotions and senses felt while reading this novel. Demon Kissed is the beginning of an amazing adventure….”

H.M. Ward was recently in the Washington Post about her debut novel Demon Kissed with over 38,000 super-awesome fans! Ward interacts with readers via her facebook page: www.facebook.com/demonkissed. Stop by and say hi. This New Yorker turned Texan will entertain you and make you laugh. Demon Kissed is the first novel in her new paranormal romance series.