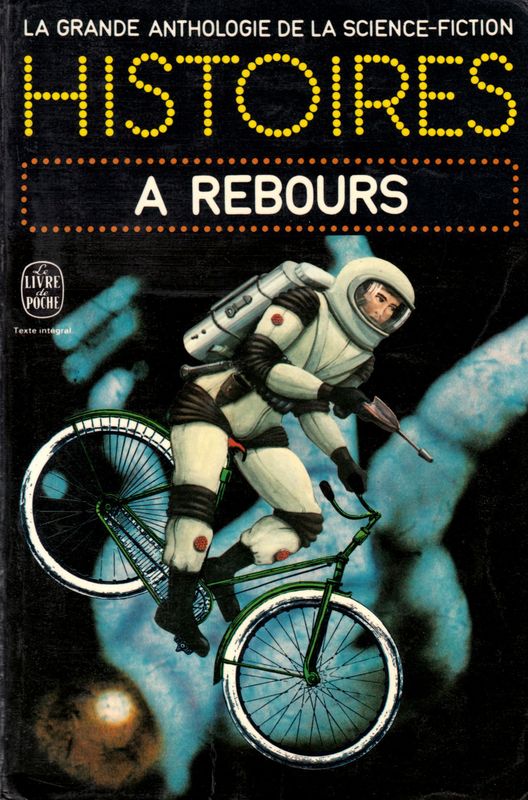 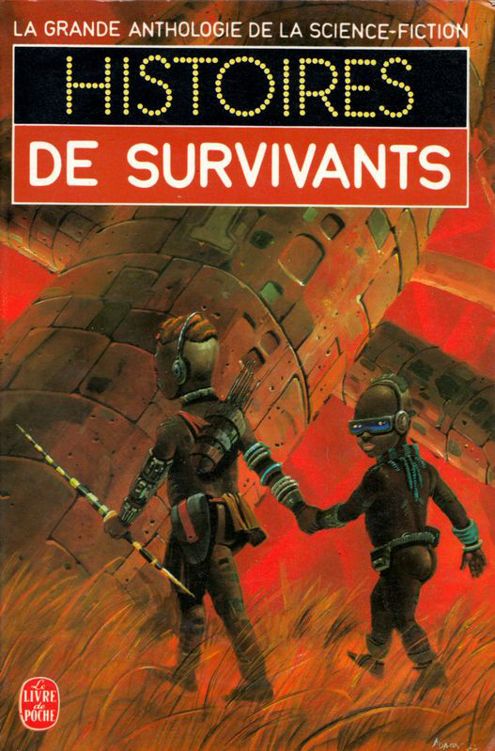 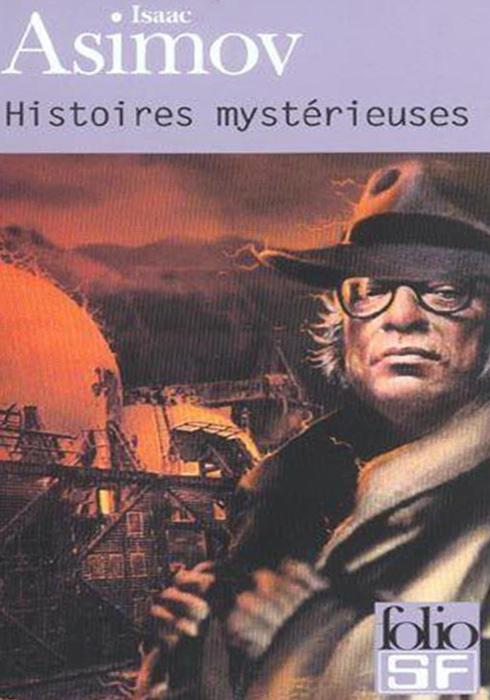 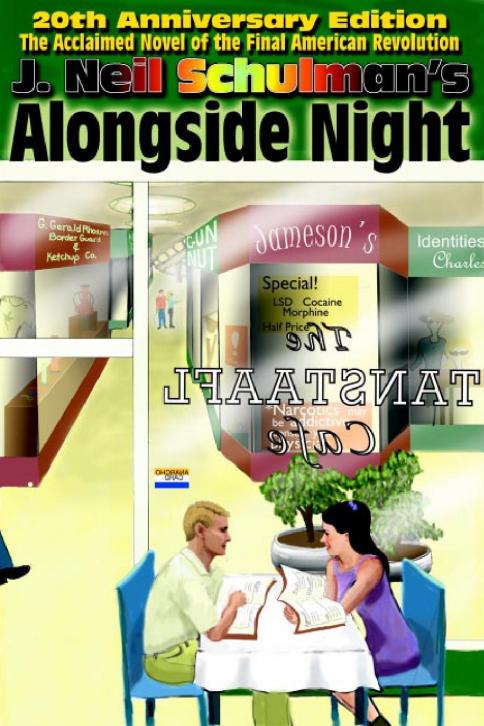 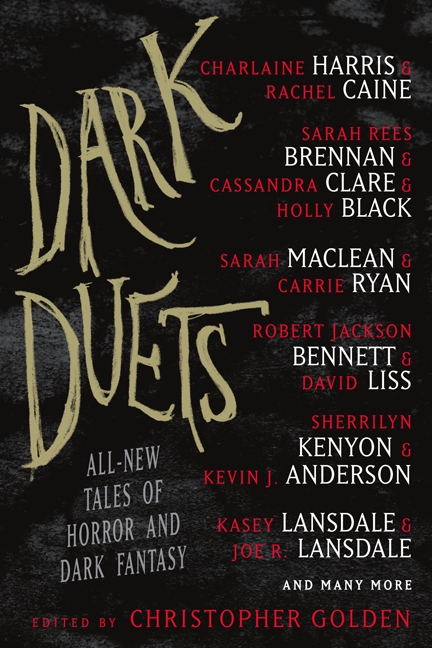 DARK DUETS: New Tales of Horror and Dark Fantasy will be published in January, 2014 by Harper Voyager. Edited by Christopher Golden, it features an extraordinary lineup of collaborative stories, with the authors of each story collaborating for the very first time. And here they are!

SUMMARY: When I was fourteen, a cousin of mine angered a Malignant One. It was a big case, a genuine scandal. Maybe you remember it. At the time, when it ended, I just wanted to forget about the whole thing. But a couple of years have passed and I guess maybe it's time to think about it again. Thus begins Ellen Pierson's story of how she helped her cousin Paul contend with the Malignant One running a temp agency in the office building where he worked. Ellen's story is a bright and moving tale set in the same fabulous, fantastic America as that of Rachel Pollack's award-winning Unquenchable Fire. Funny and frantic, poignant and powerful, Temporary Agency is an enduring fable from a writer whose work, in the words of Orson Scott Card, "like a river in flood, resists the well-channeled ways, cutting its own channel through the fictional terrain."
Tad Williams 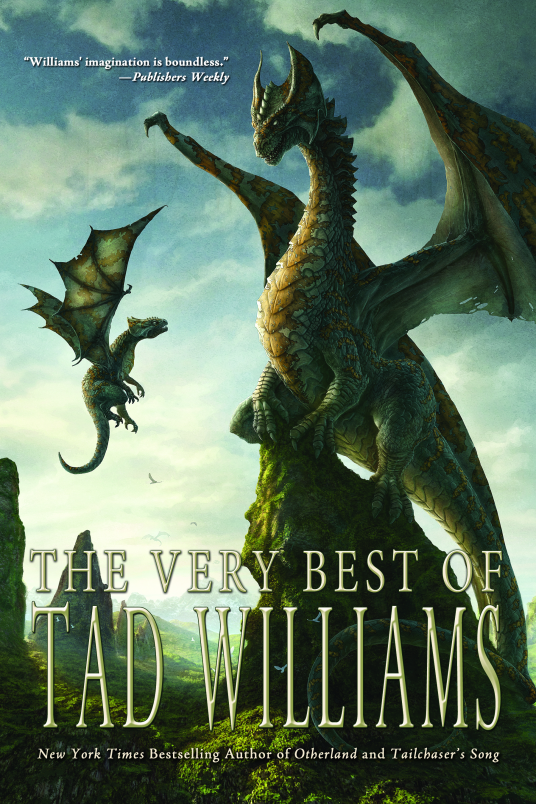 The Very Best of Tad Williams

The Very Best of Tad Williams

This career retrospective from beloved author Tad Williams (Otherland; Tailchaser's Song; Shadowplay) demonstrates why he is one of fantasy's most enduring icons. The Very Best of Tad Williams collects Williams' finest work in multiple genres, including epic fantasy, urban fantasy, and YA. These superlative tales, many of which were previously available only in limited editions, introduce dragons, wizards, assassins, heroes, and fools — even a few cyberpunks.

Readers familiar with Williams' internationally bestselling novels and series will be delighted that in his short fiction he explores myriad new possibilities and adventures. Here are the stories that showcase the exhilarating breadth of Williams’ imagination, hearkening back to such classic fantasists as J. R. R. Tolkien, Ray Bradbury, Peter S. Beagle, and beyond. 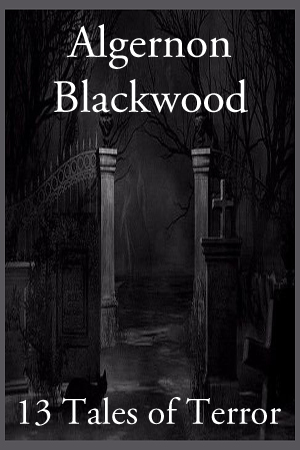 The stories selected for this eBook came from a variety of sources.

All the stories were either scans of books I own or in digital format---pdf, rtf, txt and/or HTML 1.0 files. I converted, cleaned-up and re-formatted all the stories contained in this eBook to better suit an eBook reader.

I “test” my final epubs on a Nook Color and an iPad2 to ensure the best possible reading experience; however, not all eReaders are the same and don’t always display epubs in the same way as others. This is especially true when it comes to the Table of Contents (ToC), images within the epub and the display of the book cover.

I adhered as much as possible to the original punctuation, spelling and sentence structure in each story. Many of these stories were written with a very specific structure and style that may seem odd when presented in an electronic format. I found this especially true in the way many characters’ dialogue was written.

Please understand, in an effort to preserve the author’s text, some words, structures etc. may seem like errors that I missed while creating this eBook for you. No words or text of the authors’ original works were omitted or altered; each story is word-for-word as presented in the original source file.

If you find errors, or run into any difficulty with this eBook please feel free to contact me through Bolt.

Finally, it is my sincerest wish that you have the best possible reading experience with this eBook.

Algernon Henry Blackwood was born on march 14, 1869 and was an English short story writer and novelist. Blackwood was one of the most prolific writers of ghost stories in the history of the genre. He was also a journalist and a broadcasting narrator. S. T. Joshi has stated that "his work is more consistently meritorious than any weird writer's except Dunsany's" and that his short story collection Incredible Adventures (1914) "may be the premier weird collection of this or any other century".

Blackwood was born in Shooter's Hill (today part of south-east London, but then part of northwest Kent) and educated at Wellington College. His father was a Post Office administrator who, according to Peter Penzoldt, "though not devoid of genuine good-heartedness, had appallingly narrow religious ideas". Blackwood had a varied career, working as a milk farmer in Canada, operating a hotel, as a newspaper reporter in New York City, bartender, model, journalist for the New York Times, private secretary, businessman, and violin teacher.

Throughout his adult life, he was an occasional essayist for various periodicals. In his late thirties, he moved back to England and started to write stories of the supernatural. He was very successful, writing at least ten original collections of short stories and eventually appearing on both radio and television to tell them. He also wrote fourteen novels, several children's books, and a number of plays, most of which were produced but not published. He was an avid lover of nature and the outdoors, and many of his stories reflect this. To satisfy his interest in the supernatural, he joined the “Ghost Club”. He never married; according to his friends he was a loner but also cheerful company.

Jack Sullivan points out that "Blackwood's life parallels his work more neatly than perhaps that of any other ghost story writer. Like his lonely but fundamentally optimistic protagonists, he was a combination of mystic and outdoorsman; when he wasn't steeping himself in occultism, including Rosicrucianism and Buddhism, he was likely to be skiing or mountain climbing.”

His two best known stories are probably "The Willows" and "The Wendigo". He would also often write stories for newspapers at short notice, with the result that he was unsure exactly how many short stories he had written and there is no sure total. Though Blackwood wrote a number of horror stories, his most typical work seeks less to frighten than to induce a sense of awe. Good examples are the novels The Centaur, which climaxes with a traveller's sight of a herd of the mythical creatures; and Julius LeVallon and its sequel The Bright Messenger, which deal with reincarnation and the possibility of a new, mystical evolution in human consciousness. 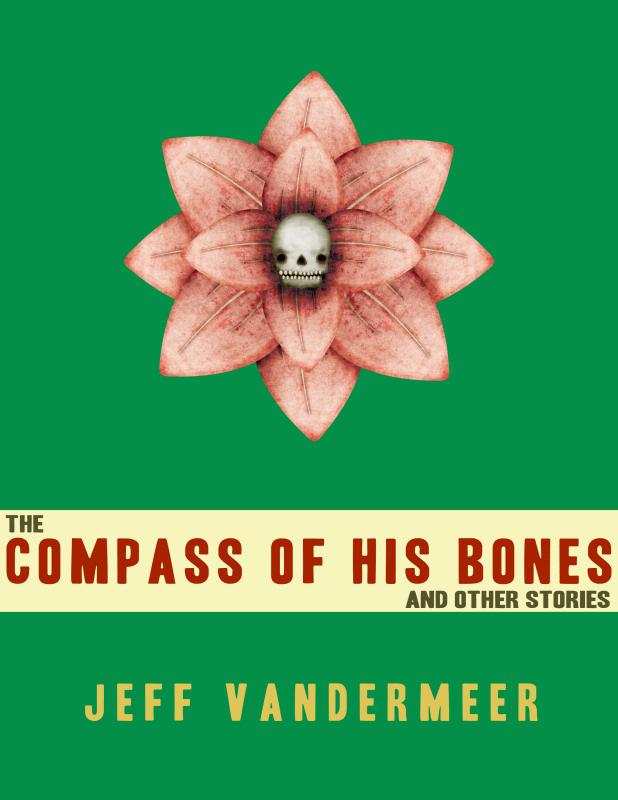 The Compass of His Bones

The Compass of His Bones

This e-book contains World Fantasy Award winner Jeff VanderMeer's novella “Ghost Dancing with Manco Tupac” and four related short stories: “The Emperor’s Reply,” “The Compass of His Bones,” “La Siesta Del Muerte,” and “Flight Is For Those Who Have Not Yet Crossed Over.” Together, these stand-alone stories set in Latin America were to have formed the backbone of a never-completed mosaic novel addressing issues of colonialism, storytelling, appropriation, and myth. The author’s interest in Latin America derived from trips there as a child, including a visit to Machu Picchu in the 1970s. Subsequently he studied Latin American history as a minor at the University of Florida 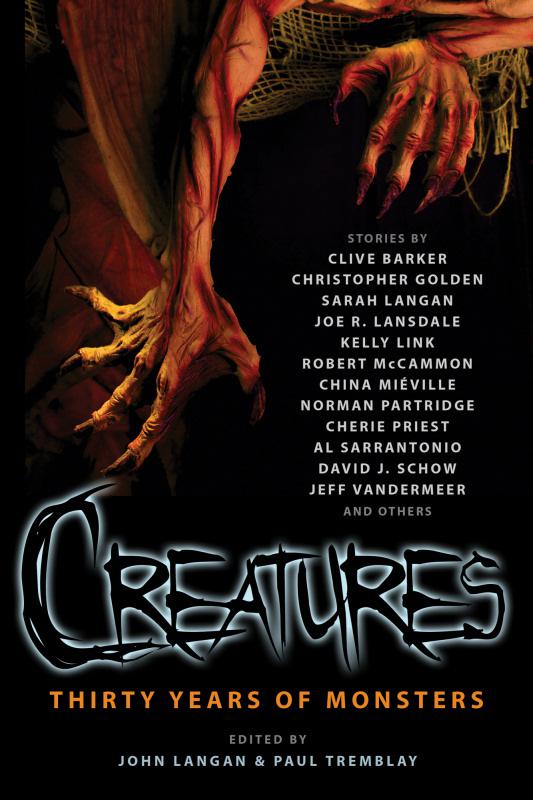 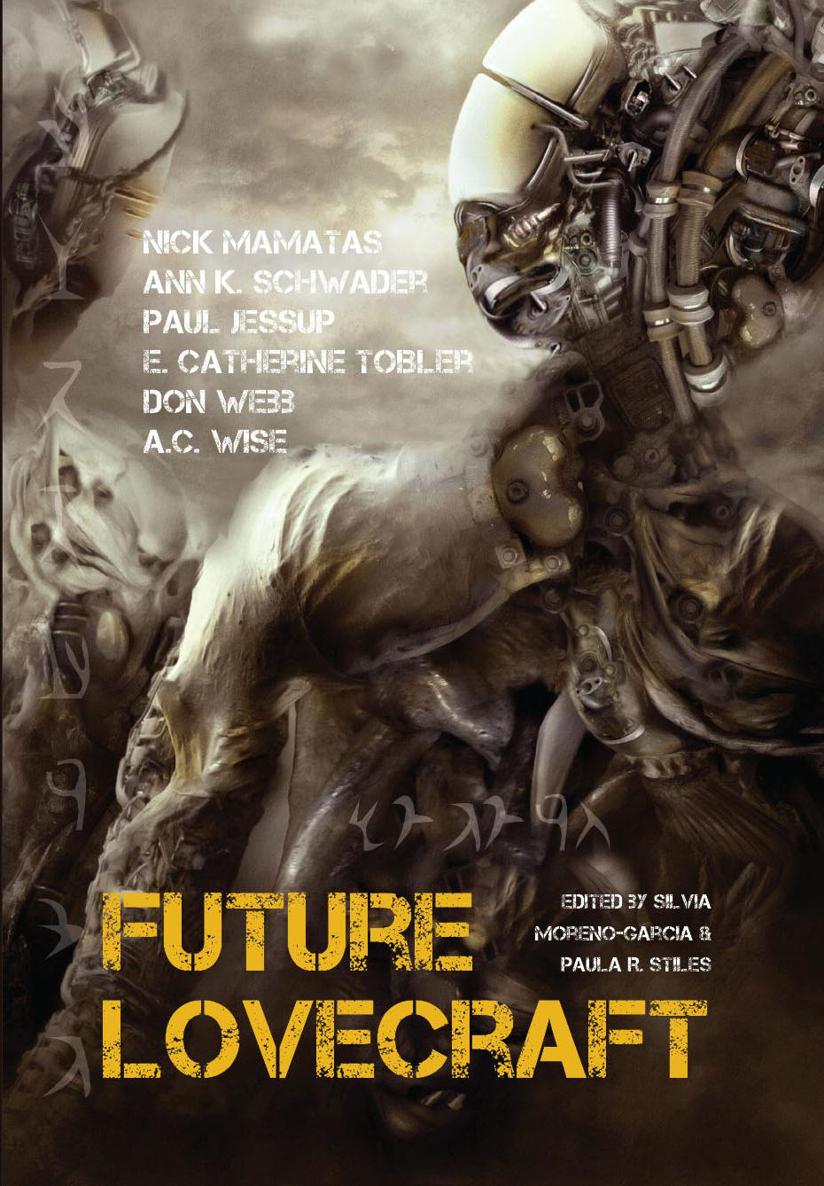 Decades, centuries and even thousands of years in the future: The horrors inspired by Lovecraft do not know the limits of time…or space.

Journey through this anthology of science fiction stories and poems inspired by the works of H.P. Lovecraft.

Listen to the stars that whisper and drive a crew mad. Worship the Tloque Nahuaque as he overtakes Mexico City. Slip into the court of the King in Yellow. Walk through the streets of a very altered Venice. Stop to admire the beauty of the flesh-dolls in the window. Fly through space in the shape of a hungry, malicious comet. Swim in the drug-induced haze of a jellyfish. Struggle to survive in a Martian gulag whose landscape isn't quite dead. But, most of all, fear the future. 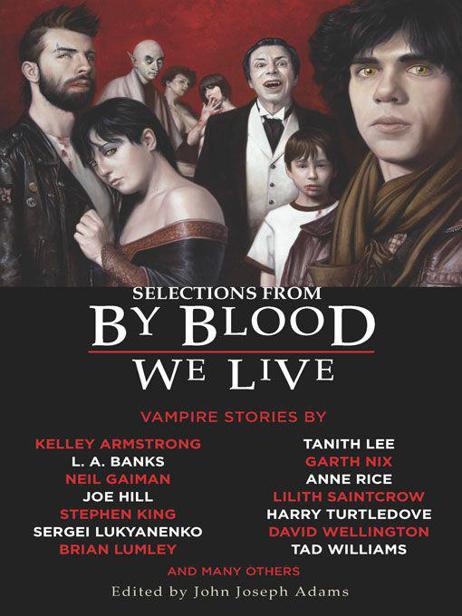 Selections from By Blood We Live 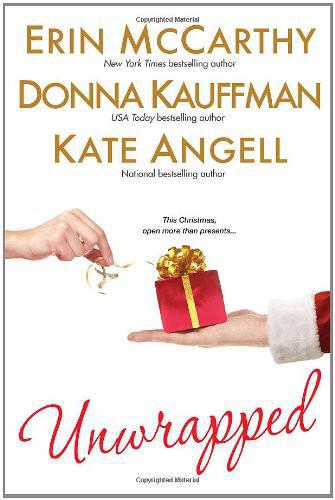 Three of Brava's biggest names heat up the holidays in this fun, sexy contemporary anthology with a heartwarming Christmas theme. From the streets of Chicago to the back roads of Kentucky to the wild dunes of a Scottish isle, mistletoe and mischief are the season's hottest gifts.
Marion Zimmer Bradley 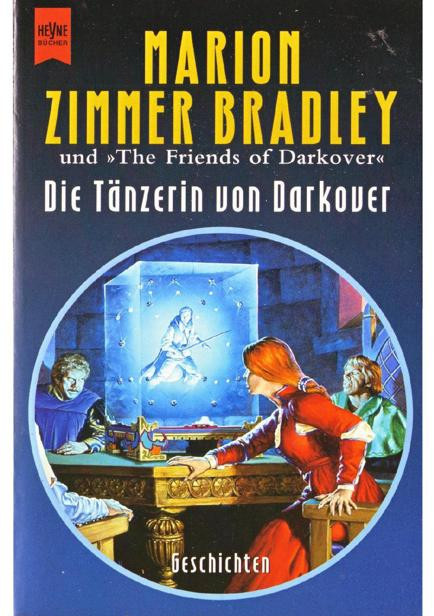 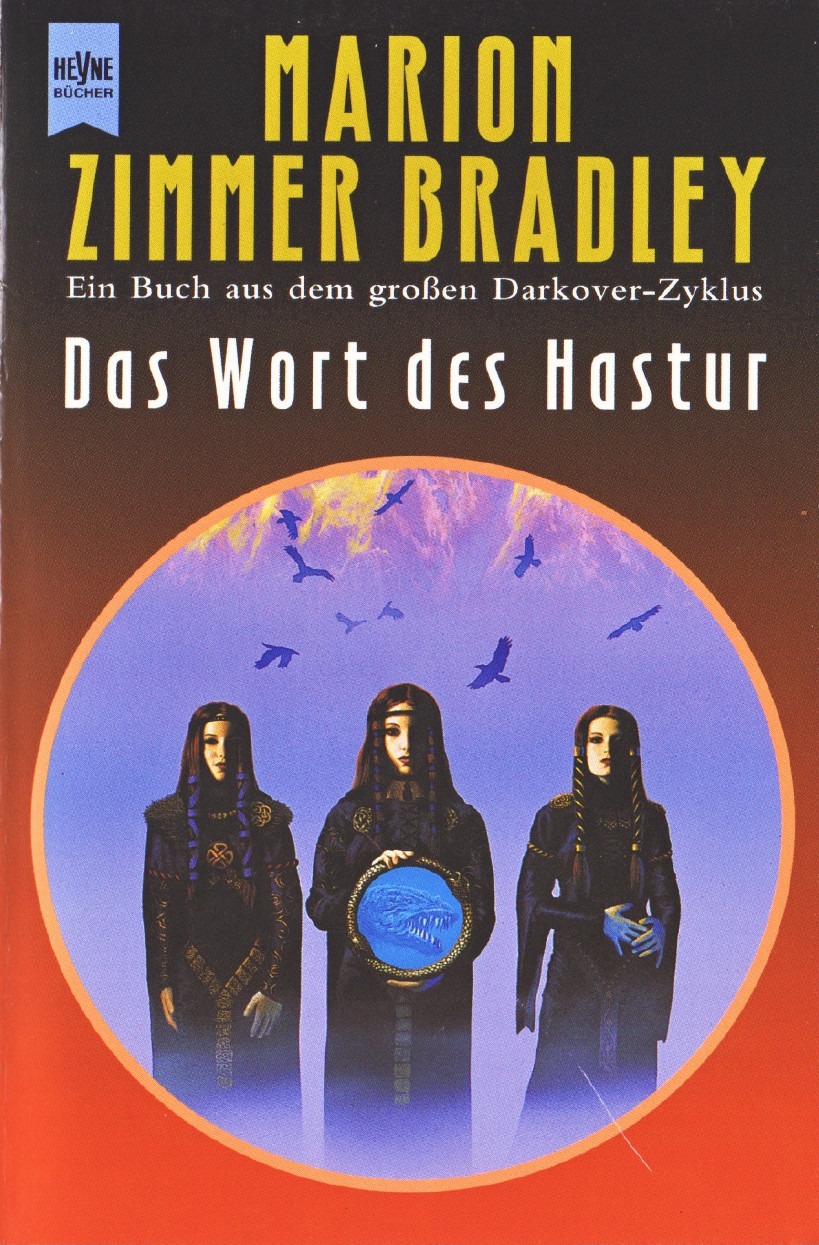 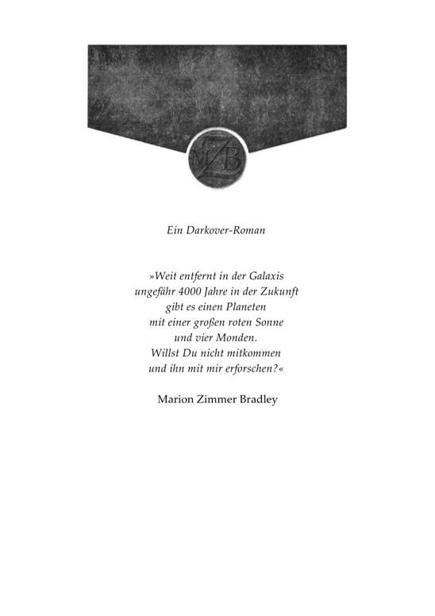 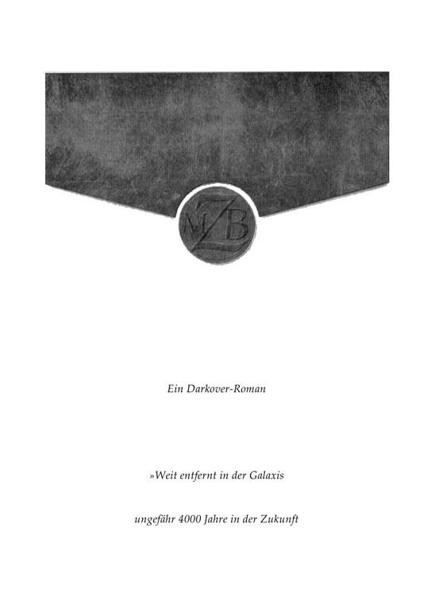 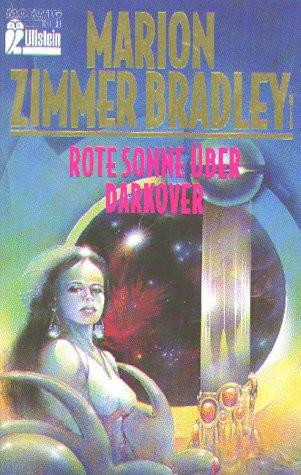 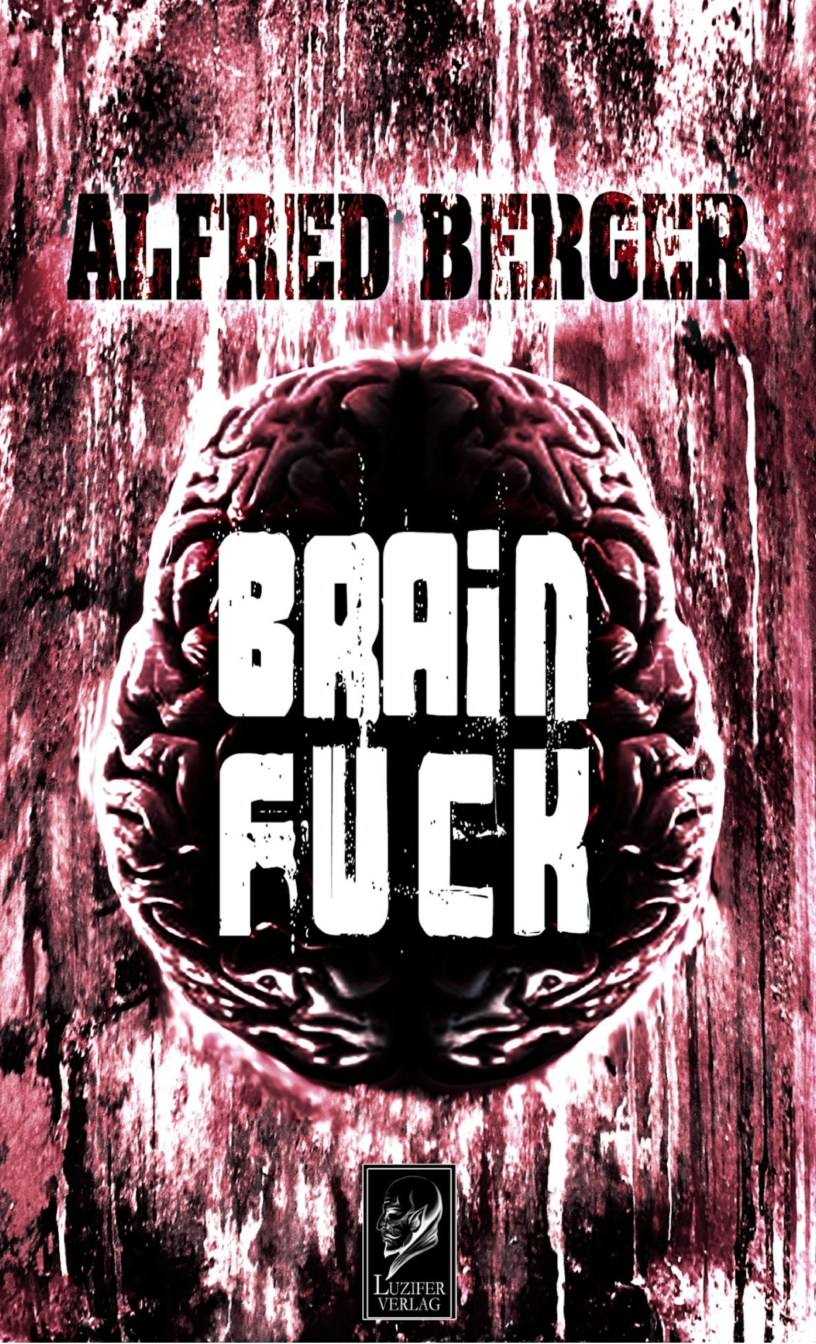 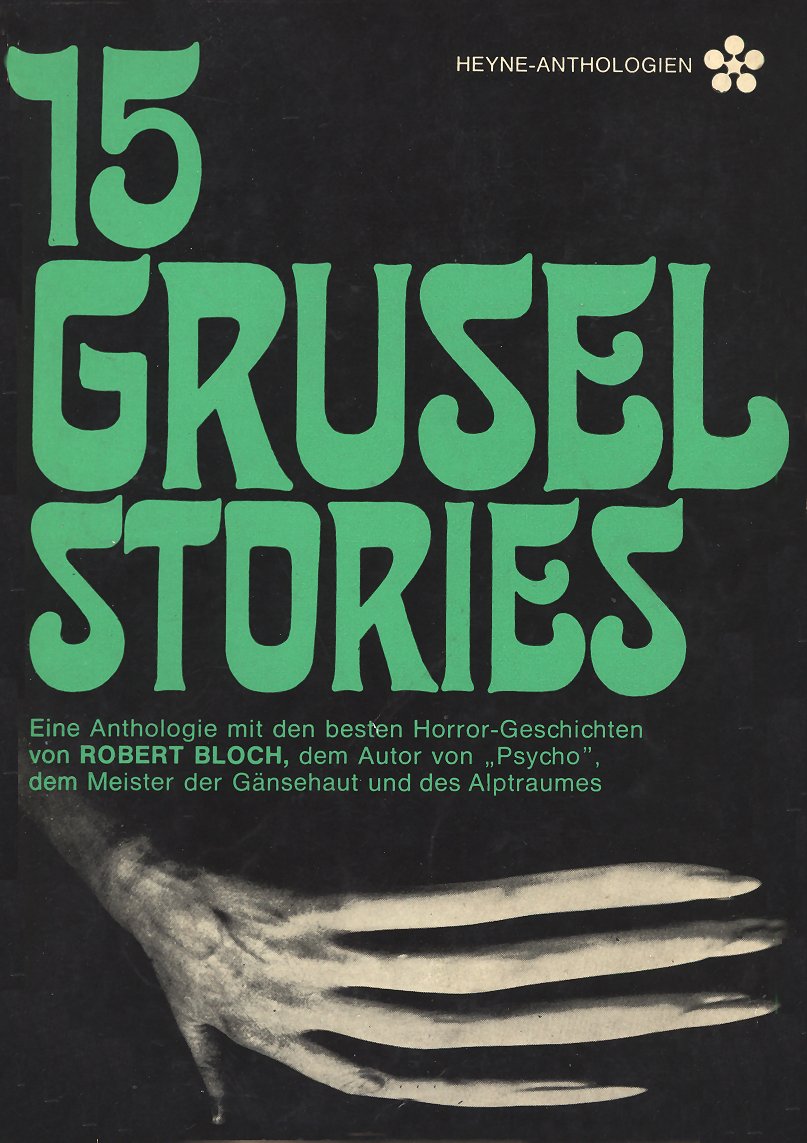 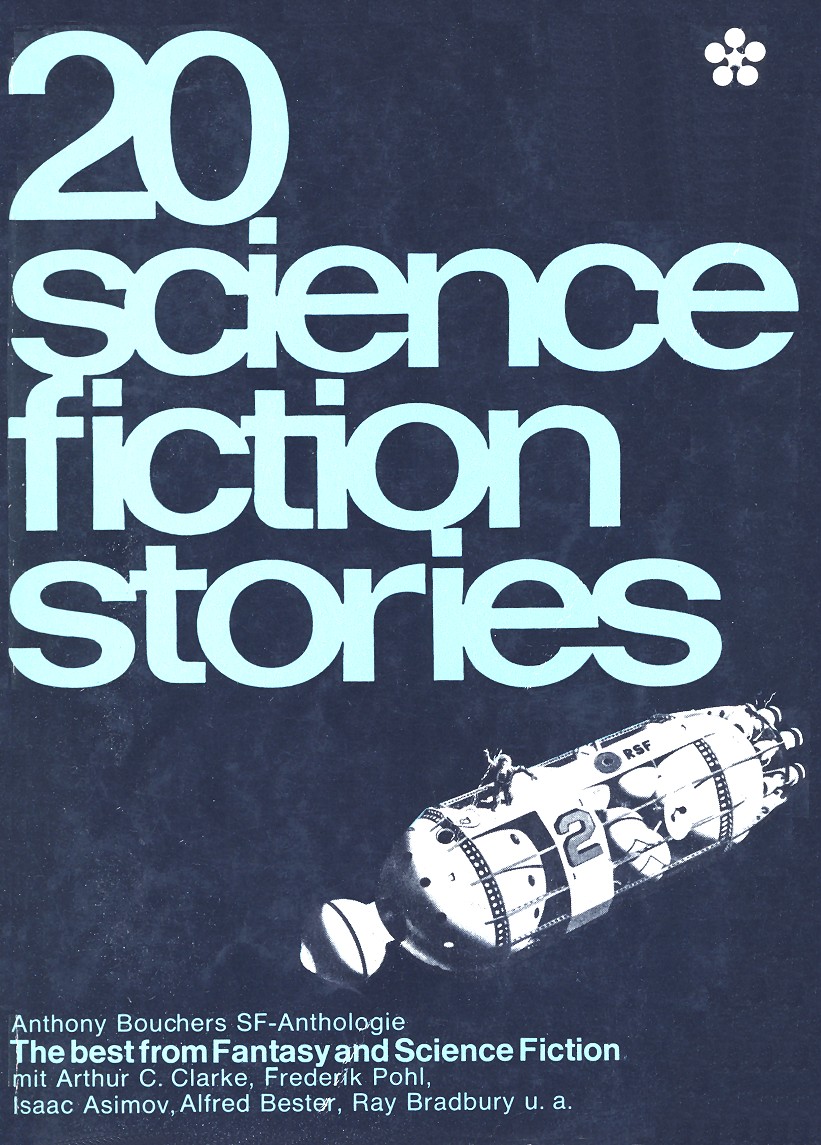 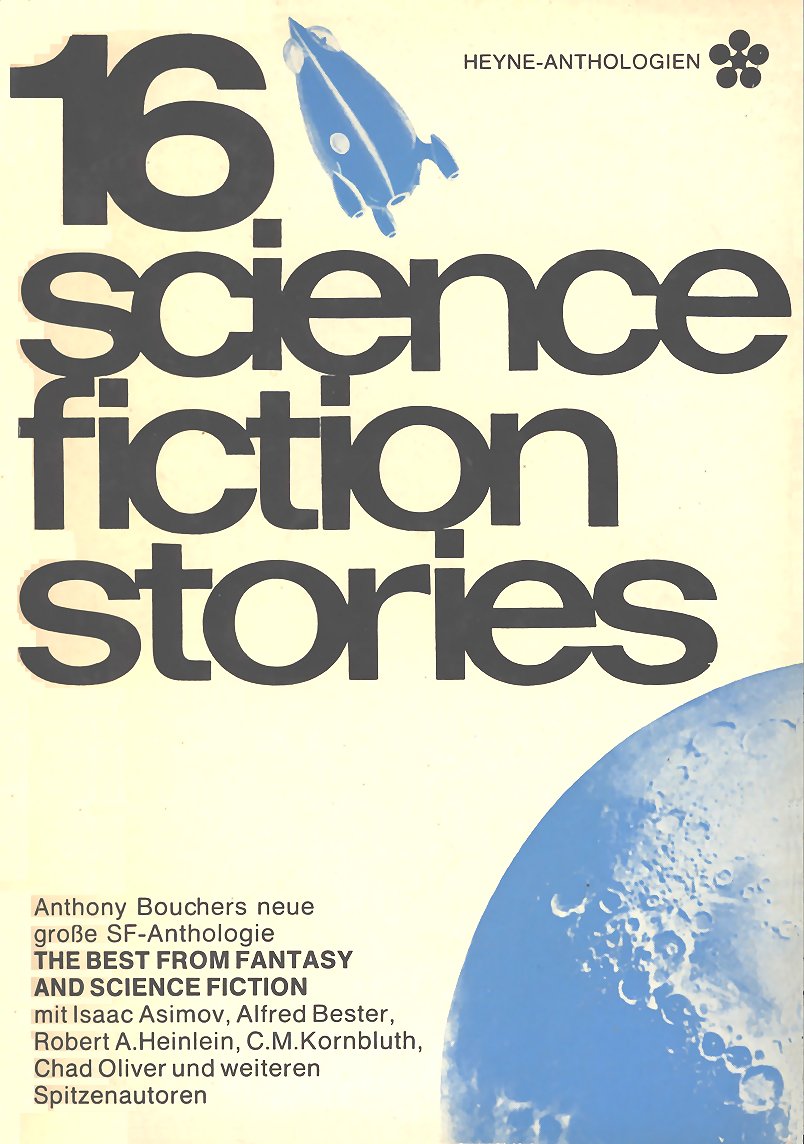 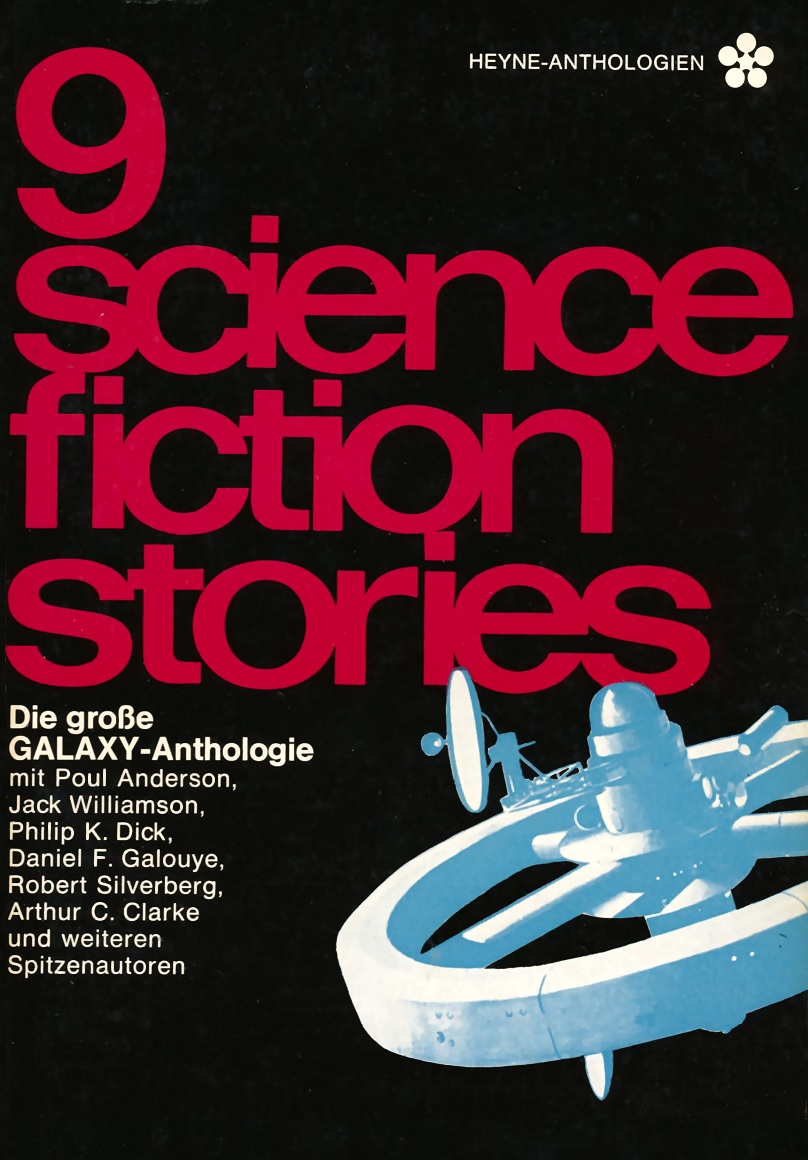 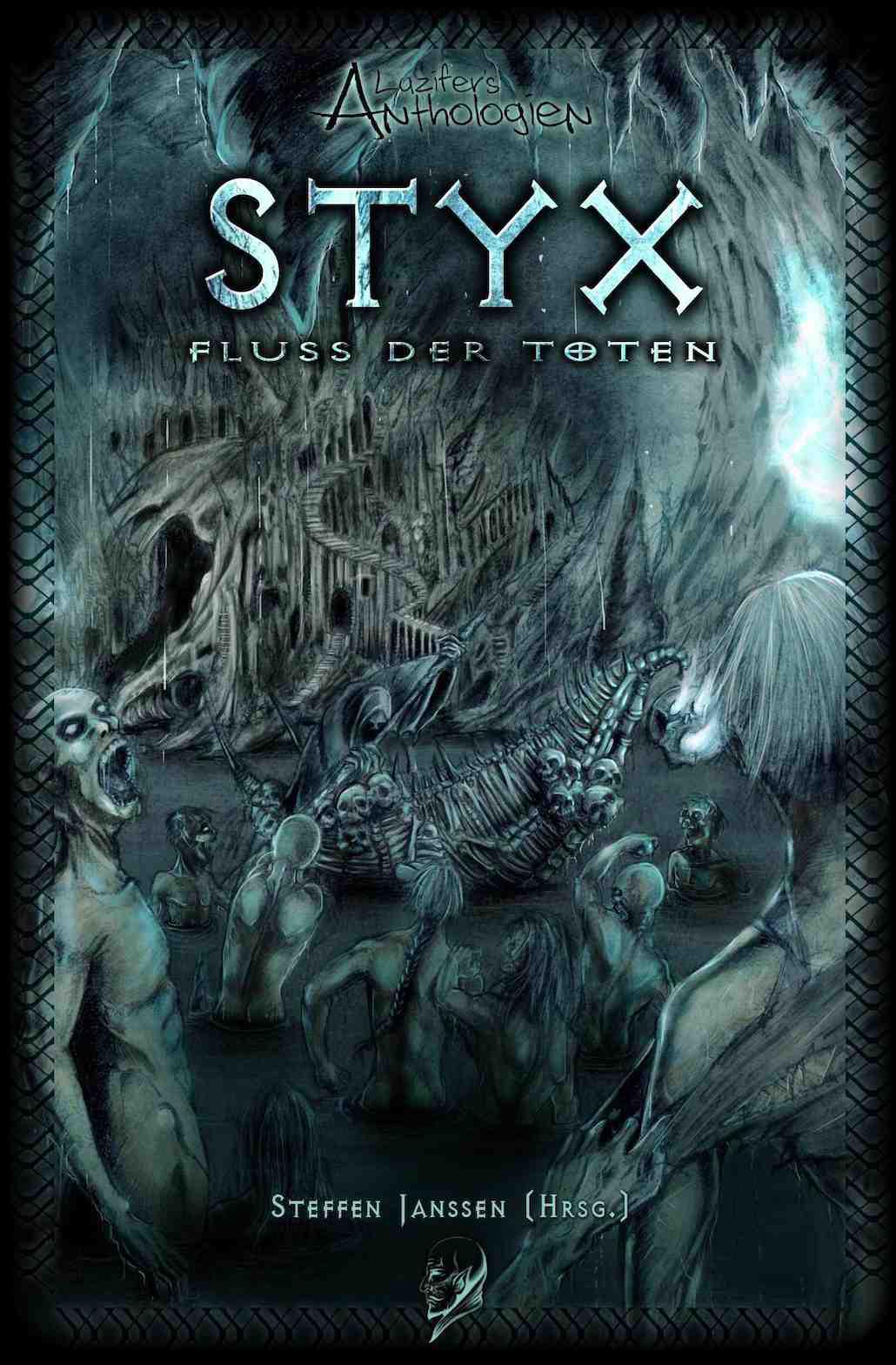 This is a sample book created using QuarkXPress
Manfred Kluge 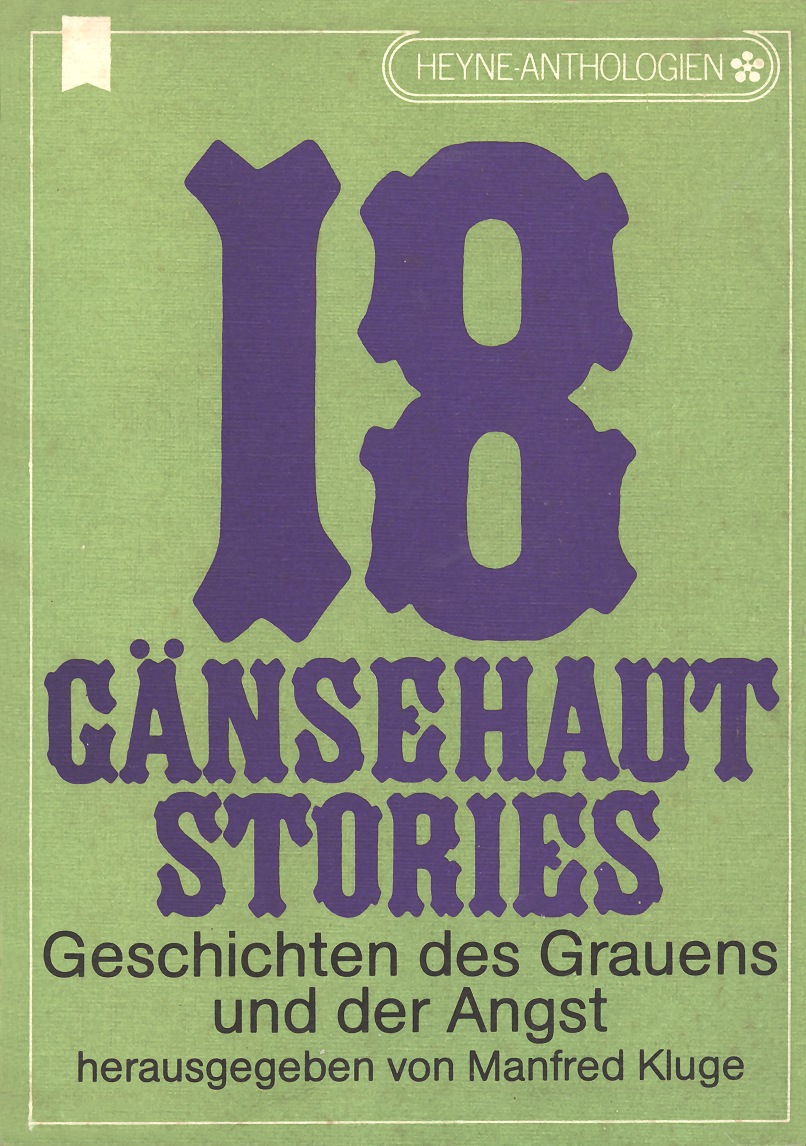 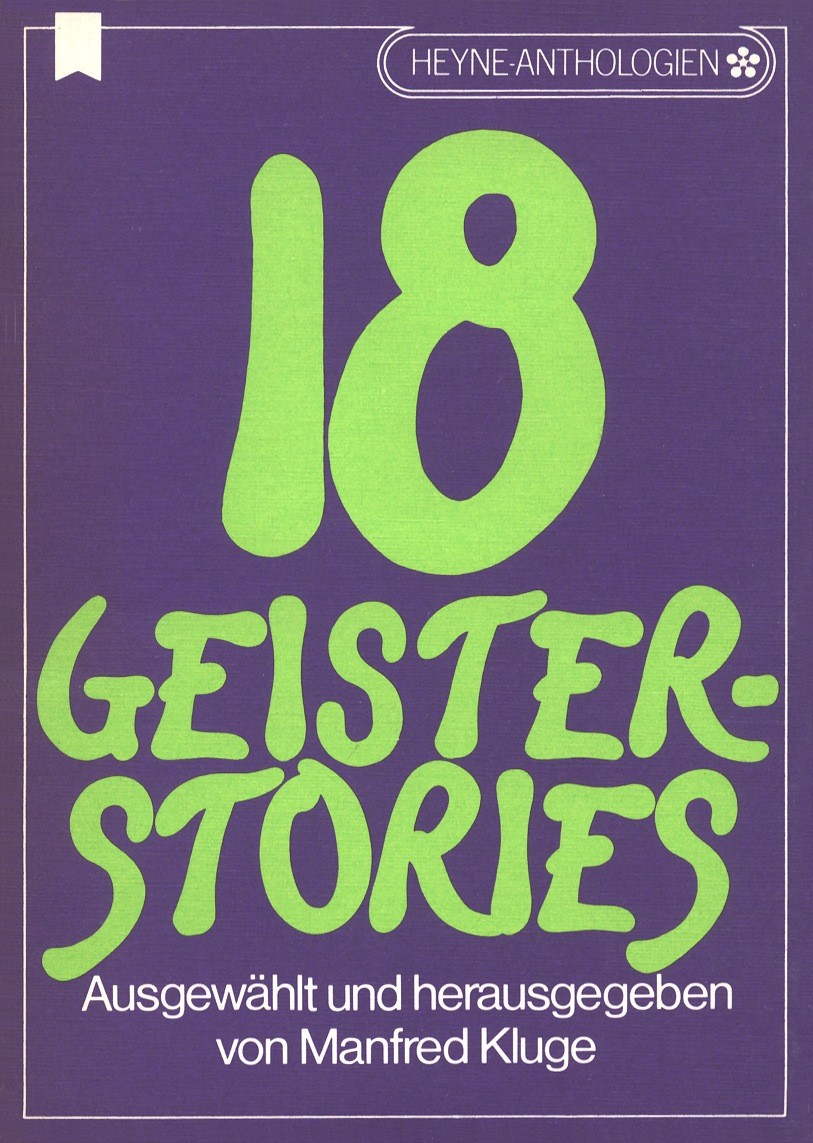 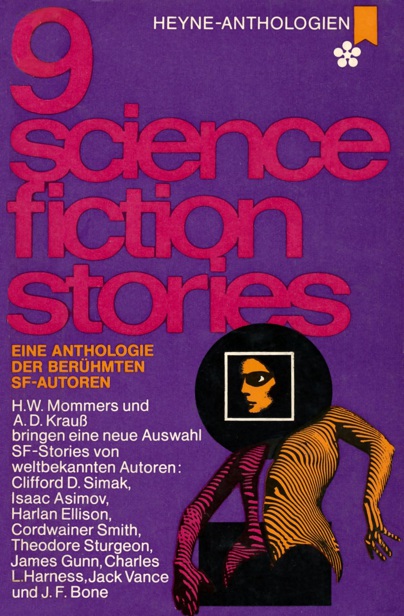