Well, I don’t know about you, but I need to take a deep breath for a minute. Maybe even a cold shower.

As Mick Mars says, “That scared me, and I’m fearless.”

Maybe it’s a good time to veer from the darkness and lighten up just for a second. So let me take a minute and make a couple points here before we move on.

When I first placed my hands on these dusty old diaries, scraps of paper and other assorted notes and scribbles, all kinds of feelings came bubbling up–mostly ones of complete shock and amazement that I was able to make any music at all during this insane time. I mean, music drives me (sometimes crazy) and songwriting is still the one place I can get lost in and not wanna be found…it’s my one and only drug and I’m surely addicted to it. But we’re not talking about OD’ing on a double verse and a chorus.

I had totally lost perspective and music had mostly taken a backseat to the voices in my head and the demons in my closet. I was like a guy who throws the anchor off the side of the ship but forgot to attach it to anything. You’re left floating aimlessly on the Sea of Stupidity. Your only hope is to be rescued, but unfortunately for you, you’re in the middle of the ocean, and the search and rescue patrol is on vacation. At some point you have to ask yourself, Who is really to blame–yourself for being stupid or the rescuers for being unavailable? All I know is music was the sails I needed to reach land, but they had tears in them the size of the Himalayas.

So another question came up for me, probably the same one you’ve been asking yourself the whole time you’ve been reading this:

How is this fucker still alive?

Simply said, I believe I’m still here because I still got stuff to do, people to love and music to write. Of course, my life has a twisted way of turning the knife back on me…trust me when I say it usually has a twist. And, to further my karma, it’s usually one of humor.

I mean, I’ll probably face my maker doing something so uncool like golfing or gardening. It would be too much for me to deal with to be sitting up there next to God, Bon Scott, Sid Vicious and Jimi Hendrix, and hear someone read my obituary from below:

OK, enuff humor (you tend to make fun of death a lot after you’ve died and come back a few times…but more on that later). Let’s not stray too far from the graveyard of my mind just yet.

What I can see clearly now is I was so busy running from my past that I didn’t even see the headlights hinting that something disastrous was heading my way. A head-on collision was about to happen, yet I was too stubborn to take a hint, stubborn like a man who won’t step back from a fight, only to find out his feet have been stuck firmly in concrete boots. Sometimes your choice is no choice at all…or so we think…

So back to the story at hand, one told by contradictions from loved ones, friends and foes who never knew they were signing the Rx on my prescription of the ultimate painkillers…the ones that numb the tornado in your head. 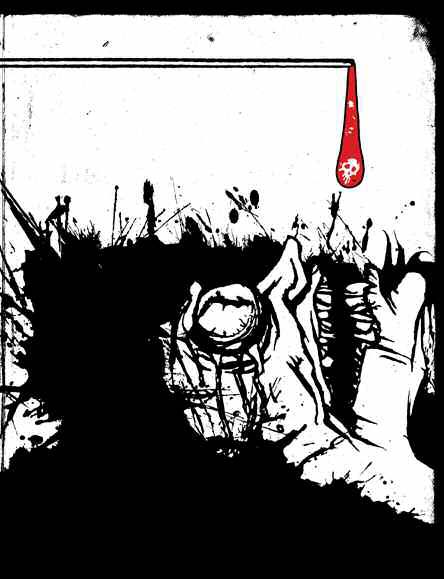