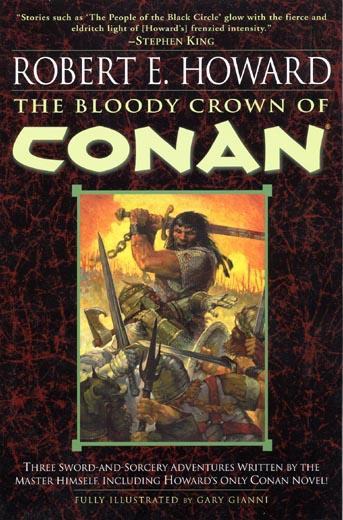 The Bloody Crown of Conan 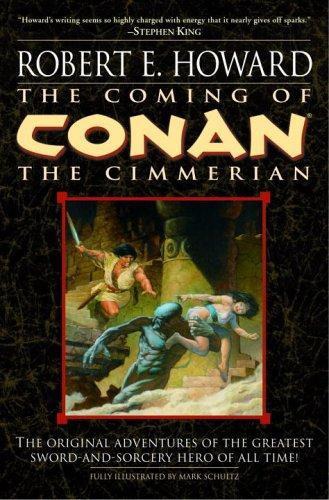 The Coming of Conan the Cimmerian 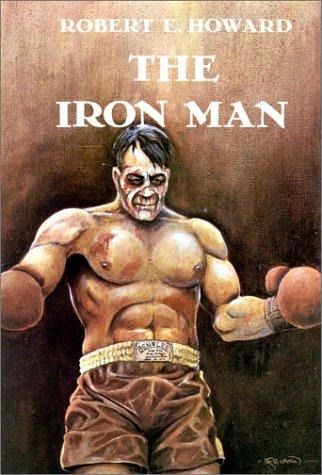 EDITORIAL REVIEW: Robert Ervin Howard (1906-1936) was an American pulp writer of fantasy, horror, historical adventure, boxing, western, and detective fiction. He is well known for having created the character Conan the Cimmerian, a literary icon whose pop-culture imprint can be compared to such icons as Tarzan of the Apes, Sherlock Holmes, and James Bond. Voracious reading, along with a natural talent for prose writing and the encouragement of teachers, conspired to create in Howard an interest in becoming a professional writer. One by one he discovered the authors that would influence his later work: Jack London and Rudyard Kipling. It's clear from Howard's earliest writings and the recollections of his friends that he suffered from severe depression from an early age. Friends recall him defending the act of suicide as a valid alternative as early as eighteen years old, while many of his stories and poems have a suicidal gloom and intensity that seem prescient in hindsight, describing such an end not as a tragedy but as a release from hell on earth.
Robert E Howard 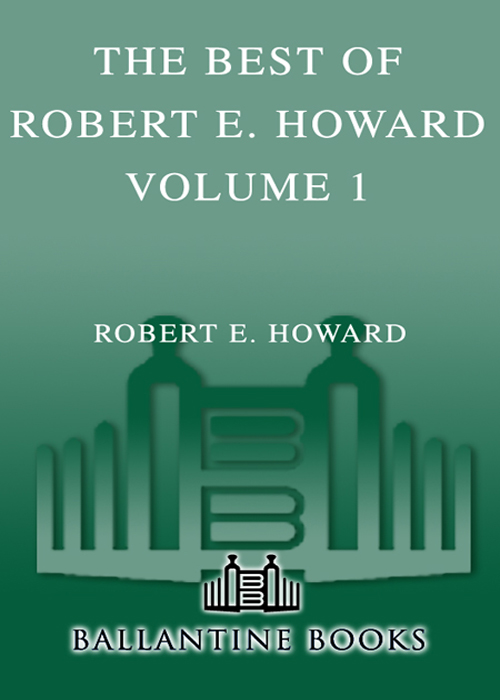 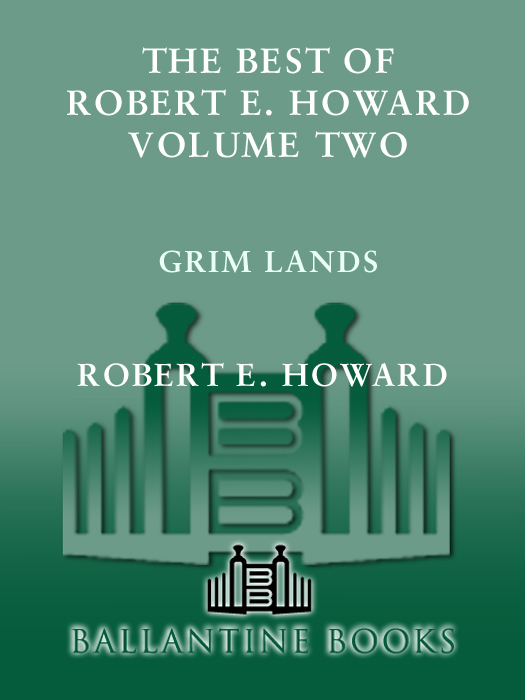 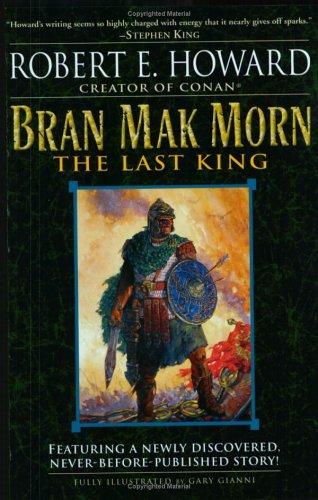 SUMMARY: From Robert E. Howard’s fertile imagination sprang some of fiction’s greatest heroes, including Conan the Cimmerian, King Kull, and Solomon Kane. But of all Howard’s characters, none embodied his creator’s brooding temperament more than Bran Mak Morn, the last king of a doomed race.In ages past, the Picts ruled all of Europe. But the descendants of those proud conquerors have sunk into barbarism . . . all save one, Bran Mak Morn, whose bloodline remains unbroken. Threatened by the Celts and the Romans, the Pictish tribes rally under his banner to fight for their very survival, while Bran fights to restore the glory of his race. Lavishly illustrated by award-winning artist Gary Gianni, this collection gathers together all of Howard’s published stories and poems featuring Bran Mak Morn–including the eerie masterpiece “Worms of the Earth” and “Kings of the Night,” in which sorcery summons Kull the conqueror from out of the depths of time to stand with Bran against the Roman invaders. Also included are previously unpublished stories and fragments, reproductions of manuscripts bearing Howard’s handwritten revisions, and much, much more. Special Bonus: a newly discovered adventure by Howard, presented here for the very first time.
Robert E Howard THE CLASSIC STORIES THAT INSPIRED THE BLOCKBUSTER FILM

Conan the Barbarian is one of the greatest fictional heroes ever created—a swordsman who cuts a swath across the lands of the Hyborian Age, annihilating powerful sorcerers, deadly creatures, and whole armies of ruthless foes. Today his name is synonymous with the epic battles of ancient times, but Conan originated in the early decades of the twentieth century with one of the founding fathers of fantasy, the visionary Robert E. Howard. The unforgettable stories collected here form a thrilling adventure, following Conan from his mercenary youth to his bloody conquests on the frontier and even the high seas. Bold and enduring, the legend of Conan the Barbarian continues to grow in popularity and influence. 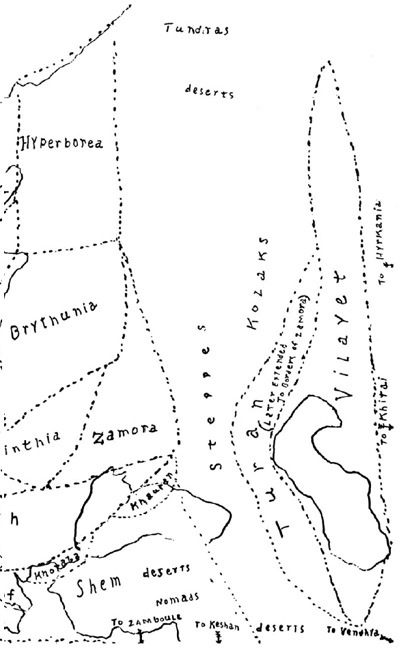 The Conquering Sword of Conan 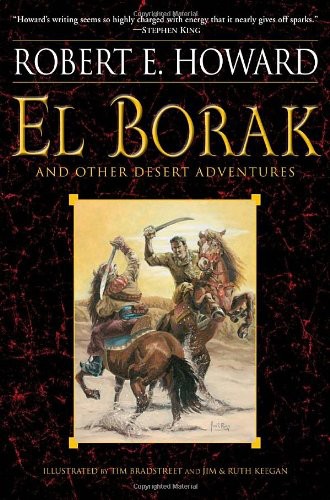 El Borak and Other Desert Adventures

El Borak and Other Desert Adventures

The late Howard (1906–1936) is best known for his sword-and-sorcery stories, but he was a prolific author whose work spanned many genres. This collection focuses on his Central Asian stories, offering 11 tales of derring-do along with various miscellanea and supplemental materials. Much of the book is devoted to Francis El Borak Gordon, an American caught up in the struggle among various imperial powers who seek control of the regions north of India. More self-centered adventurers like Kirby O'Donnell and Steve Clarney get fewer pages, but provide an interesting contrast with Gordon's loyalty to his friends of all races. Many elements of these stories have aged badly, but Howard's skill as a writer and his enthusiasm for the subject matter are undeniable. Illus. by Tim Bradstreet and Jim & Ruth Keegan not seen by PW. (Feb.)
Copyright © Reed Business Information, a division of Reed Elsevier Inc. All rights reserved.

This volume of Del Rey’s collections of the works of the creator of Conan the Destroyer contains the adventures of Texan Francis Xavier Gordon, known as El Borak, who fights outlaws, messianic madmen, and other deadly opponents in Afghanistan and the Middle East in the 1920s and 1930s; and of Texas Irishman Kirby O’Donnell in the same region and time. Written for the pulps, only about half these yarns saw print before Howard died. They’re action-packed adventures, whose only supernatural elements lie in the area’s hostile geography and ancient ruins. Howard’s reportorial prose very well suits depicting a land where life is cheap, blood flows at a wrong word, and loners’ only feelings are for comradeship and honor. A must for Howard completists, this volume should also attract anyone interested in American popular culture and the use of the Middle East in American popular fiction. The notes to El Borak mention several analogous authors. --Frieda Murray 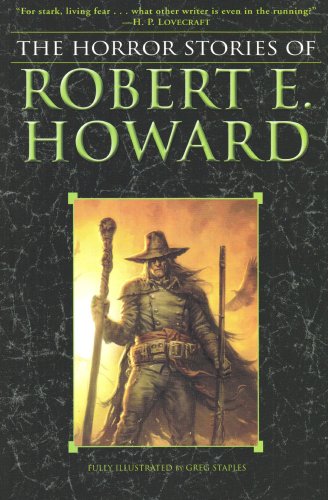 SUMMARY: Here are Howard’s greatest horror tales, all in their original, definitive versions. Some of Howard’s best-known characters–Solomon Kane, Bran Mak Morn, and sailor Steve Costigan among them–roam the forbidding locales of the author’s fevered imagination, from the swamps and bayous of the Deep South to the fiend-haunted woods outside Paris to remote jungles in Africa.The collection includes Howard’s masterpiece “Pigeons from Hell,” which Stephen King calls “one of the finest horror stories of [the twentieth] century,” a tale of two travelers who stumble upon the ruins of a Southern plantation–and into the maw of its fatal secret. In “Black Canaan” even the best warrior has little chance of taking down the evil voodoo man with unholy powers–and none at all against his wily mistress, the diabolical High Priestess of Damballah. In these and other lavishly illustrated classics, such as the revenge nightmare “Worms of the Earth” and “The Cairn on the Headland,” Howard spins tales of unrelenting terror, the legacy of one of the world’s great masters of the macabre.
Robert E Howard 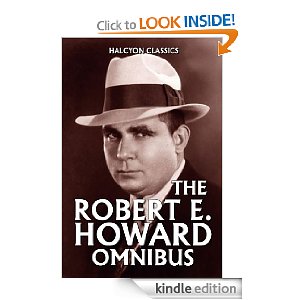 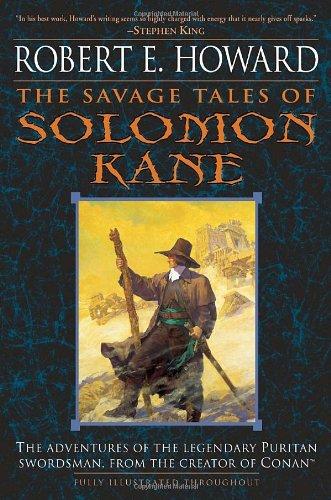 The Savage Tales of Solomon Kane

The Savage Tales of Solomon Kane

SUMMARY: With Conan the Cimmerian, Robert E. Howard created more than the greatest action hero of the twentieth century—he also launched a genre that came to be known as sword and sorcery. But Conan wasn’t the first archetypal adventurer to spring from Howard’s fertile imagination. “He was . . . a strange blending of Puritan and Cavalier, with a touch of the ancient philosopher, and more than a touch of the pagan. . . . A hunger in his soul drove him on and on, an urge to right all wrongs, protect all weaker things. . . . Wayward and restless as the wind, he was consistent in only one respect—he was true to his ideals of justice and right. Such was Solomon Kane.”Collected in this volume, lavishly illustrated by award-winning artist Gary Gianni, are all of the stories and poems that make up the thrilling saga of the dour and deadly Puritan, Solomon Kane. Together they constitute a sprawling epic of weird fantasy adventure that stretches from sixteenth-century England to remote African jungles where no white man has set foot. Here are shudder-inducing tales of vengeful ghosts and bloodthirsty demons, of dark sorceries wielded by evil men and women, all opposed by a grim avenger armed with a fanatic’s faith and a warrior’s savage heart.This edition also features exclusive story fragments, a biography of Howard by scholar Rusty Burke, and “In Memoriam,” H. P. Lovecraft’s moving tribute to his friend and fellow literary genius.
Robert E Howard 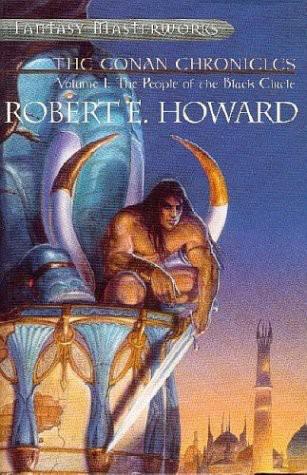 The Conan Chronicles, Vol. 1: The People of the Black Circle

The Conan Chronicles, Vol. 1: The People of the Black Circle

Conan the Cimmerian: he rose from boy-thief and mercenary to become king of Aquilonia. Neither supernatural fiends nor demonic sorcery could oppose the barbarian warrior as he wielded his mighty sword and dispatched his enemies to a bloody doom on the battlefields of the legendary Hyborian Age.

Collected together for the first time anywhere in the world, in chronological order, are all Robert E. Howard's definitive stories of Conan, exactly as he wrote them, as fresh, atmospheric and vibrant today as when they were first published in the pulp magazines more than sixty years ago. 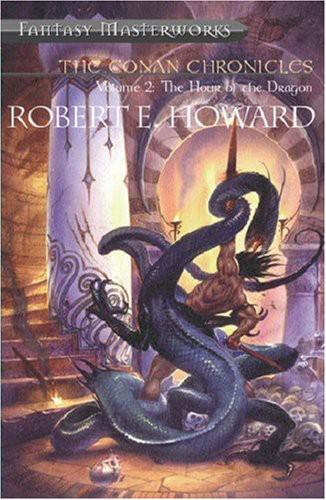 The Conan Chronicles, Vol. 2: The Hour of the Dragon

The Conan Chronicles, Vol. 2: The Hour of the Dragon

Of the 21 Conan the Barbarian tales that Robert E. Howard (1906-1936) completed in his all-too-brief lifetime, Hour of the Dragon was the only novel-length story. It may also be the very best of the series, crafted when the legendary pulp writer was working at the height of his powers. Conan is a huge swordsman fighting both natural and supernatural foes in a time-lost world known as the Hyborian Age. At this point in his bloody career, Conan is the middle-aged king of the ancient kingdom of Aquilonia. He must fight one final battle to save the known world from a resurrected sorcerer named Xaltotun. Only the fabled Heart of Ahriman can destroy Xaltotun, and Conan must embark on an epic quest to retrieve the Heart. Howard hammered out every word as if he had actually lived through it himself, and in doing so forged a crimson masterpiece of heroic fantasy. (This novel has also been published as part of the formal Conan series as Conan the Conqueror.) --Stanley Wiater 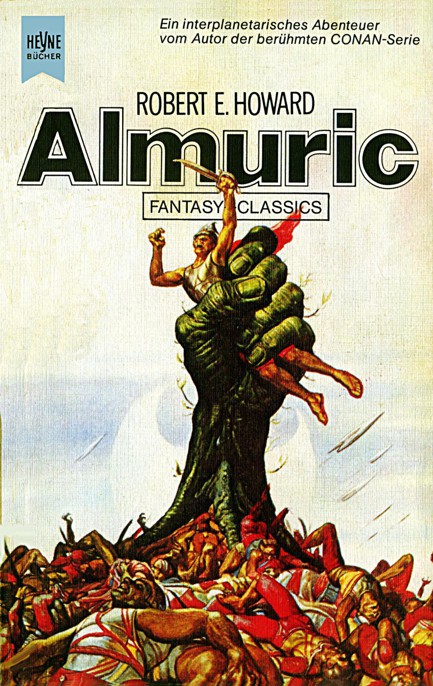 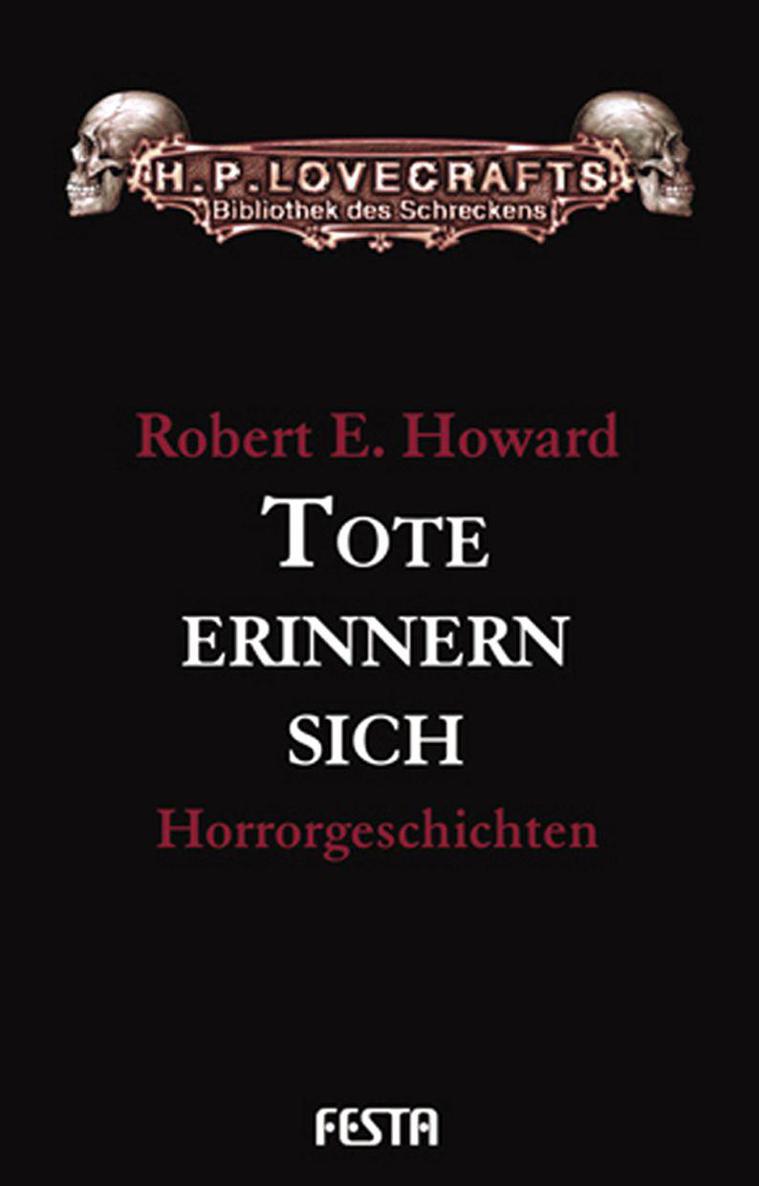 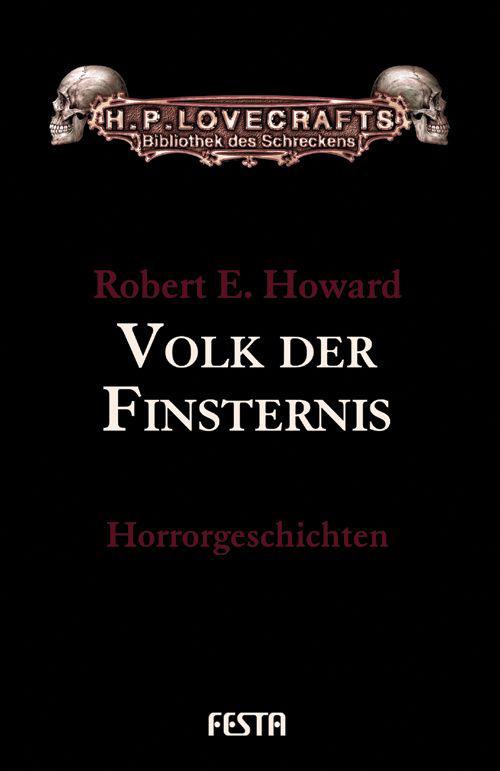