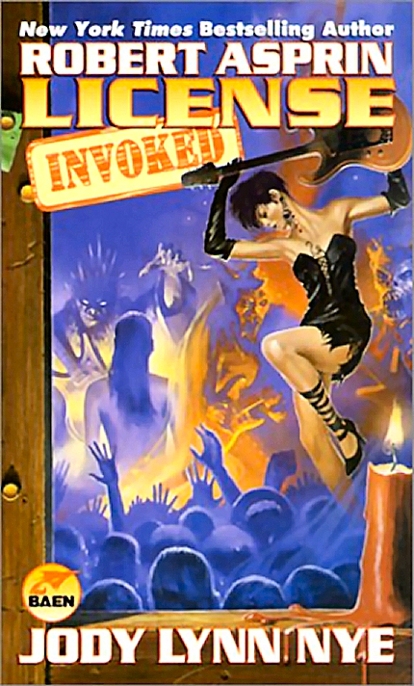 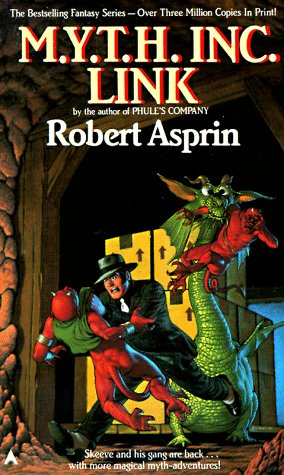 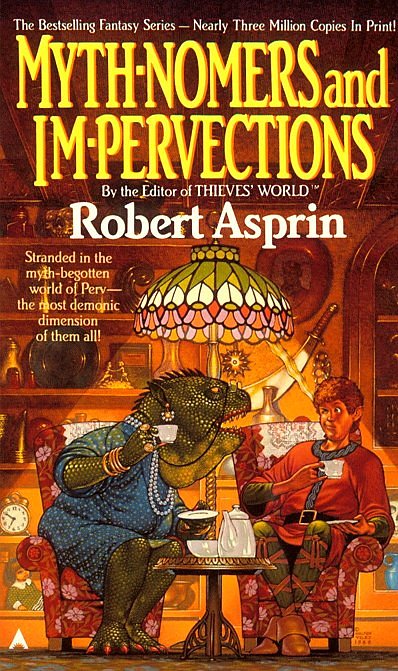 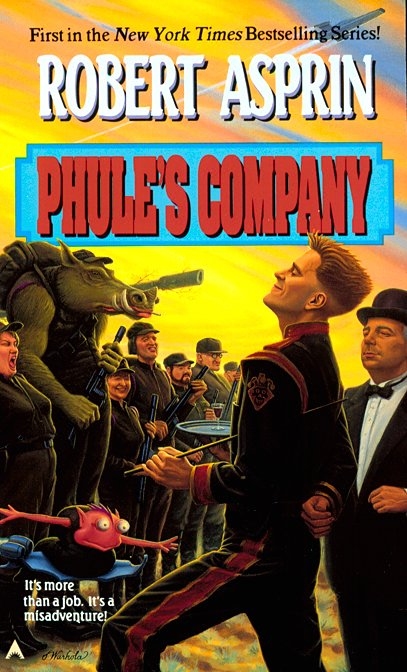 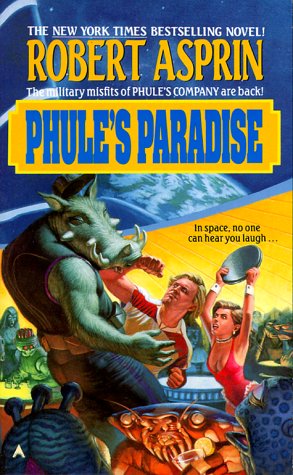 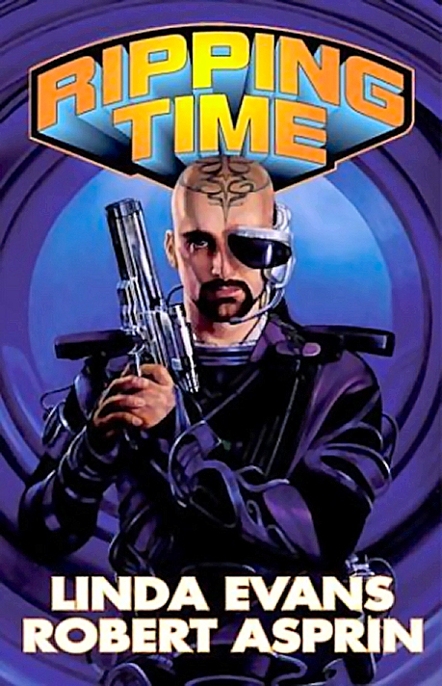 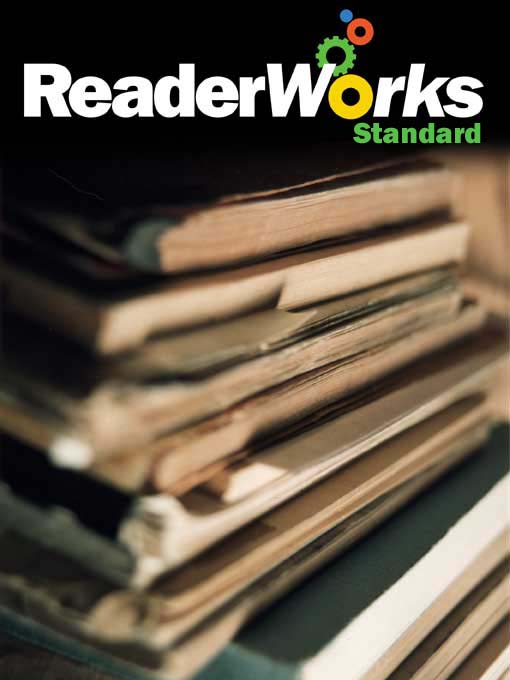 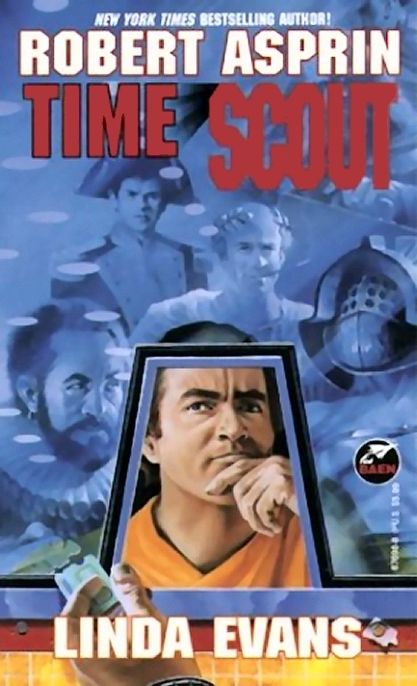 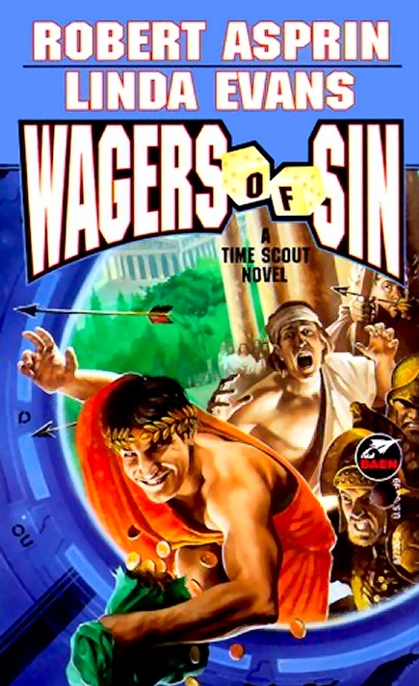 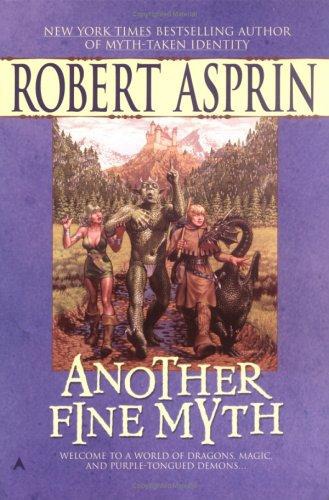 SUMMARY:
Skeeve was a magician's apprentice--until an assassin struck and his master was killed. Now, with a purple-tongued demon named Aahz as a companion, Skeeve is on a quest to get even. This title is the first of Asprin's bestselling Myth novels to become available in digest-sized paperback. 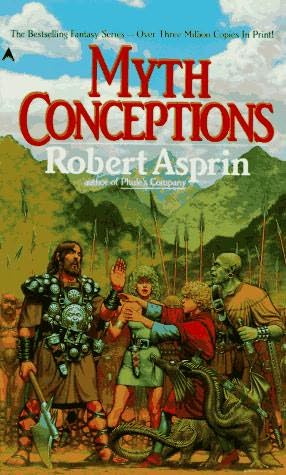 SUMMARY:
After mistakenly being appointed court magician by a regent who should have known better, apprentice mage Skeeve must defend a kingdom from the mightiest invading army in the world. 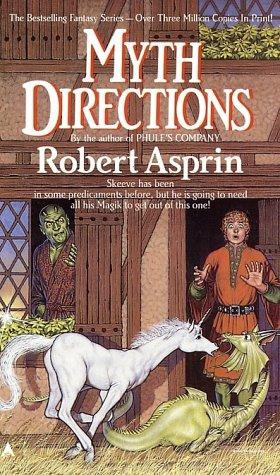 SUMMARY:
The Trophy was unique, no question. It was easily the ugliest object Skeeve had ever seen in any dimension. And before landing his job as Court Magician, young Skeeve had seen a thing or two.But Tanda wanted it-and, as a rule, whatever the beautiful Tanda wants, Tanda gets.The problem is, getting it will take more than luck. It will take all the talents of a young but gifted magician, a scaley but canny Pervect, and a charming demon not above a little interdimensional thievery... 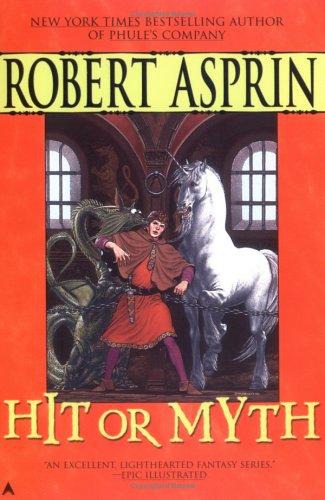 SUMMARY:
The apprentice Skeeve is just getting used to his duties as Court Magician of Possiltum. Then King Roderick decides to take a powder, leaving Skeeve in his place to marry his homicidal fiancee and face the Mob's fairy godfather--who makes him an offer he can't refuse. 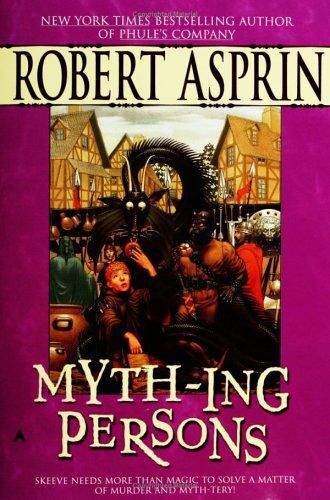 SUMMARY:
Skeeve is in a real pickle this time. His partner Aahz has disappeared, and it looks like foul play. Finding Aahz ought to be a snap for a talented magician like Skeeve, especially with a sassy apprentice and a dumb-but-brawny bodyguard along for the ride. The trouble is, they're sleuthing in another dimension. 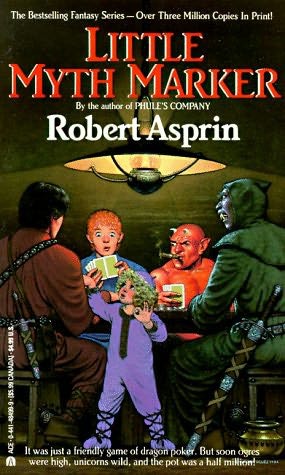 SUMMARY:
Skeeve bluffs his way into a high-stakes game of dragon poker-and wins! But now he's left with Markie, a pint-sized IOU left by a player who went broke. She conjures up a house full of trouble every time she tries to cast a spell. And now the dragon poker champion has challenged Skeeve to a game-with a pot of half a million. 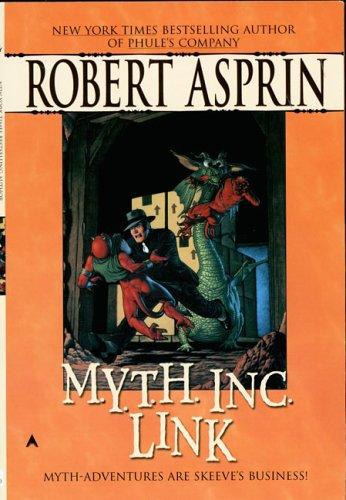 As president of M.Y.T.H. Inc., Skeeve is in charge of a myth-chievous gang that includes a pet dragon and an artistic vampire. However, is it just luck (of the bad variety) or deliberate myth-directions that have Skeeve and his gang sleuthing around some very out-of-the-way (and dangerous) dimensions? 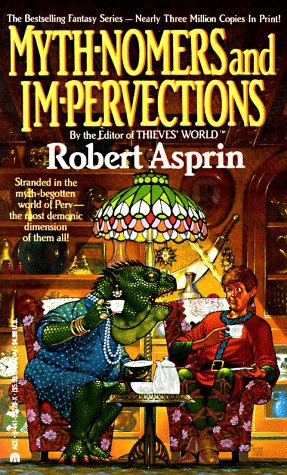 SUMMARY:
A New York Times Bestselling AuthorLocus Poll Award Winner Aahz, Skeeve's friend and mentor, has taken expectation to something his partner has said, and left in a huff. It was just a myth-understanding, but now it's Skeeve's job to apologize for his thoughtless behavior and convince his scaly cohort to rejoin the firm. 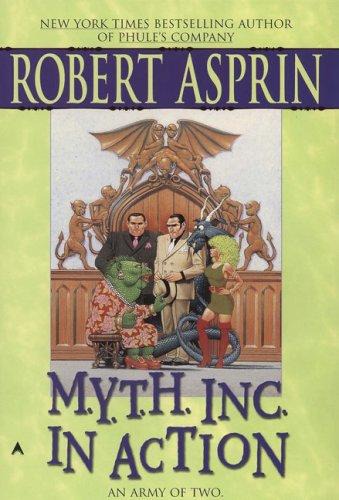 Guido and Nunzio may not be the brightest bodyguards in the world-but they certainly are faithful. When Skeeve "the Great" asks them to join the army of Possiltum, the two thugs volunteer without question...

Except: Whose side are they on?

Queen Hemlock's? The Mob Fairy Godfather's? Skeeve's? The two baffled bodyguards barely have time to figure it out-they've been handed government-issue crossbows, armored with leather skirts, and given combat orders by the dreaded drill sergeant Smiley! 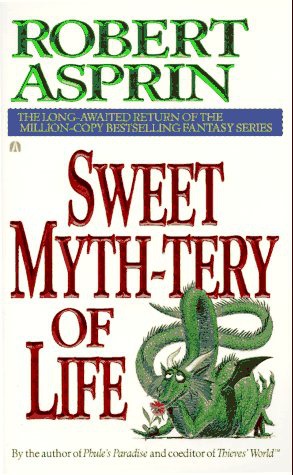 SUMMARY:
A Hugo and Nebula Award-winning AuthorWhen it reigns, it pours all over well-meaning magician Skeeve. Romance, that is. He's a drowning man, fending off a relentless array of suitors. Should he hop away with Bunny, his assistant? Drink all night with Cassandra, the vampire? Or give in and marry Queen Hemlock -- the one that will assure his future, and maybe keep him alive ... 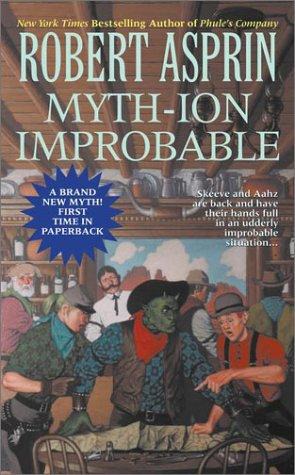 SUMMARY:
In this brand new Myth tale, Skeeve, Aahz, and Tanda journey into the Kowtow realm to retrieve a golden cow that gives gold-laced milk. But this strange land combines the Wild West with vegetarian cowboys and the vampire-cursed hills of Transylvania--where gold is common as dirt, and danger lurks behind every sagebrush. 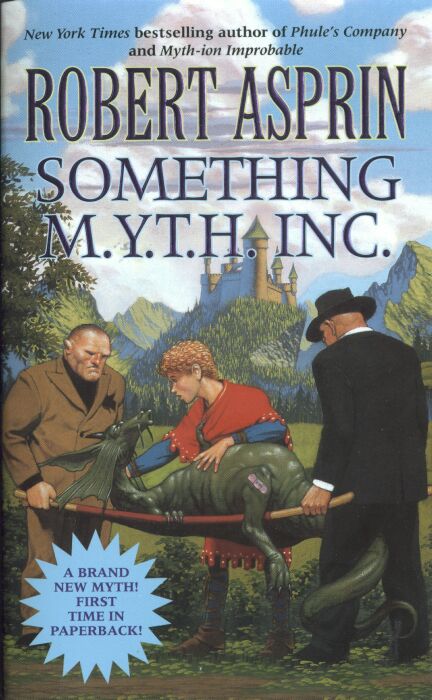 Things are not well in the kingdom... While Skeeve and Aahz are preoccupied with the aftermath of Gleep's shooting, the M.Y.T.H. Inc. crew faces its biggest challenge yet-not one, but multiple challenges to the king and his court sorcerer! Word on the street is that the kingdom is under the control of a mighty sorcerer. It's obvious that this magician dabbles in the black arts: He consorts with demons. He has a dragon for a pet. He's connected to the criminal underground, trading political influence for their assistance in keeping the populace under control. And for most citizens, all this could be overlooked, except that this villain has committed the greatest crime possible: he's raised taxes! Clearly something has to be done! The citizens are beginning to ponder and mutter, both individually and in groups, about how this tyrant can be brought down. And while they vary greatly in skill and intelligence, certainly the sheer volume of them virtually ensures the eventual downfall of the scoundrel that's currently growing fat off the kingdom...the man called Skeeve the Great. Can the M.Y.T.H. Inc. gang protect Skeeve from these attacks and still convince him that everything is business as usual? **New!** In a last-minute change in plans, Something M.Y.T.H. Inc. will now also include a brand new short story by Robert Asprin and Jody Lynn Nye! 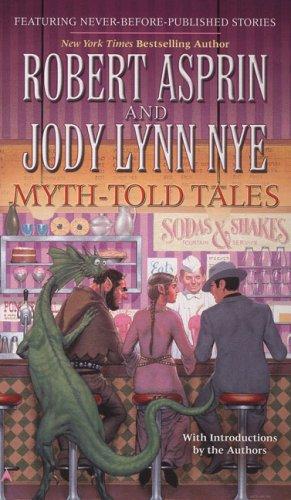 Fun and interesting re-introductions to the characters and situations Asprin has invented. -- Steven H. Silver

It's a nightmare when master magician Skeeve and Aahz the Pervect fall into Dreamland...

Bunny turns to Skeeve for help when an inter-dimensional beauty contest turns ugly.

Reality shows were never quite like this. Eligible bachelors vie to win Princess Gloriannamarjolie's hand-if not her heart... 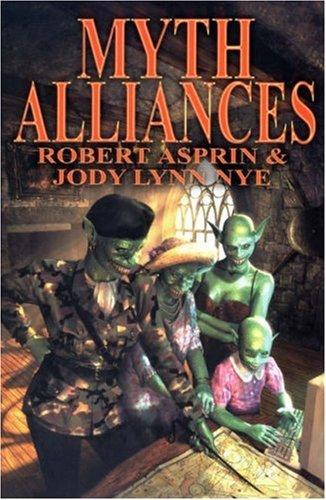 SUMMARY:
Here it is! The first novel in the brand new Myth Adventures Series, by the authors of Liscence Invoked! Robert Asprin teams up with Jody Lynn Nye (Applied Mythology and Advanced Mythology) to bring you a brand new set of Myth Adventures with Skeeve, Aahz, Tanda, and the rest of the gang! Will be followed in 2004 by Myth-taken Identity. "You want me to do what?" Aahz gasped, spitting a mouthful of beer clear across the open dance floor. The tuba player gave him a chiding glance and turned his instrument over to empty it. "Ten...Female...PERVECTS!? A dimension full of Wuhses? The Deveels cheated them out of their last dime, and the Pervects got it back for them? And now they want us to throw the Pervects out? Mmm, mmm." He slammed his mug down. I recoiled slightly at the violence of the gesture. His lips twisted. His shoulders started to heave. "Mmm mmm mmm. Ha ha ha ha. HAWHAWHAWHAWHAW! HAWHAWHAWHAWHAW!" He laughed until the building rang with the sound of his voice. The other patrons watched him nervously as he slapped me on the back, stood up, slipped to his knees, and slid down the trestle of the table until he was sitting on the floor laughing. Soon, he recovered and climbed up to his feet again. He took my hand in a crushing grip. "Aw, part-Skeeve," he said, wiping tears from his yellow eyes. "I've missed you, kid. That is one of the best jokes I've heard in months. Really did me good. Fraulein!" He held up a hand and snapped his fingers. "A round for my friends!" "But I'm serious," I stated. 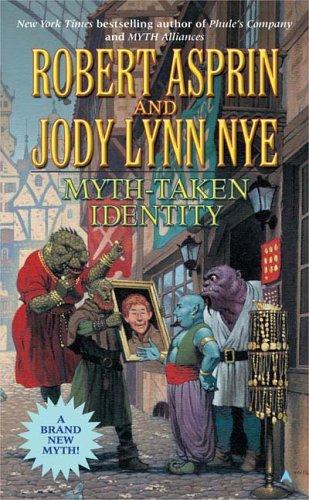 SUMMARY:
Someone--or something--masquerading as Skeeve the Magnificent is racking up hundreds of thousands of gold pieces of debt. It's up to Aahz the Pervect (not pervert!) to find the myth-creant and put an end to the shopping spree. 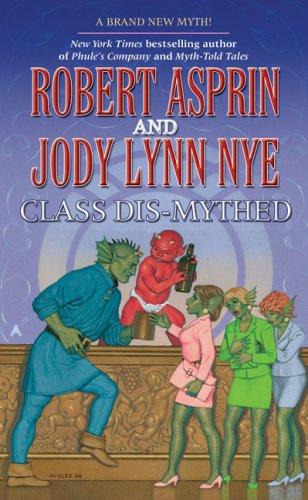 When Aahz, Massha, Chumley, and Markie send Skeeve, who is now an inter-dimensional legend, students to tutor in the art of practical magik, he, while trying to teach himself some new tricks, discovers that his little proteges have something rather special and deadly up their sleeves. Reprint.
Robert Asprin 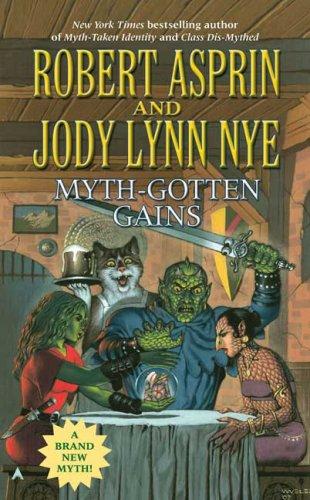 SUMMARY:
Someone is collecting animated treasures and keeping them from their heroic destinies. Reunited with the lovely Trollop Tananda, Aahz the Pervect must help out a sword called Ersatz, and embark on a quest that just may restore his lost magical powers. 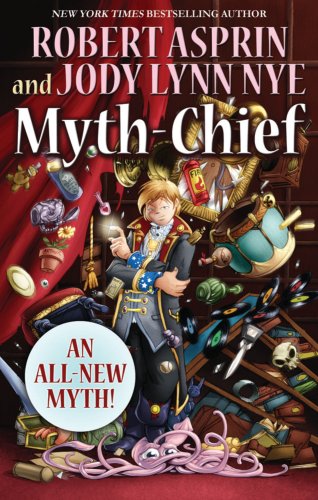 SUMMARY:
GET SKEEVED! Skeeve the Magnificent, magician to kings and King of Magicians, Businessman and Problem-Solver Extraordinaire, has come out of retirement. And hes set up shop in the Bazaar, right on the home turf of his old company, M.Y.T.H. Inc. Too bad his former co-worker, Aahz the Pervect, is not exactly thrilled with the competition. Looks like a little wager is in order.